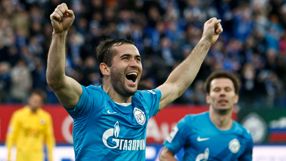 Kerzhakov scored a hat-trick in Zenit's 3-1 win over Anderlecht when they last met in European competition two years ago.

The home side dominated most of the match but it was Anderlecht striker Milan Jovanovic who had the best chance to break the deadlock before Kerzhakov's goal when he failed to hit the target after being sent clear early in the first half.

At the other end Brazil striker Hulk, who joined Zenit for a club record fee of 60 million euros last month, also went close with a powerful free-kick from the edge of the box a few minutes later.

Anderlecht, missing leading scorer Dieudonne Mbokani of Congo after he returned from international duty with a broken nose, created several chances but failed to score for the third consecutive game in the competition.

"Of course I'm disappointed with the outcome but really proud of my team, the way we played tonight," he told reporters.

"As for the penalty I'm not complaining although I haven't seen the replay."

The victory put Zenit back in contention for a place in the knockout stages after they had lost their first two matches.

Jovanovic had a strong penalty claim waved away in the second half after being taken down by a Zenit defender and the home side then had to withstand late pressure from the Belgian champions.

The win helped ease the pressure on Zenit who have been in turmoil for the past month with several senior players, according to media reports, unhappy that the club splashed out more than $100 million on Hulk and Belgium midfielder Axel Witsel.

Zenit demoted Russia captain Igor Denisov to the reserve team last month after the midfielder had refused to play and issued an ultimatum to renegotiate his contract.

"I'm glad we got this win. We really needed it and we need to keep winning," said Italian coach Luciano Spalletti.

"We're in the process of changing our attacking patterns and we need a bit more time before we can use it to the full potential. But we must keep working."