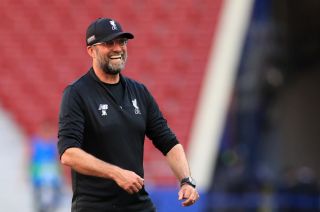 Liverpool manager Jurgen Klopp has laughed off his appalling record in finals by rebranding himself a “world record-holder in winning semi-finals” and insisting he is not the problem.

The German has lost the last six showpiece events he has contested since winning the German Cup in 2012.

He has finished a Champions League runner-up twice (with Borussia Dortmund and then Liverpool last season) as well as losing two more German Cups with Dortmund and League Cup and Europa League finals with Liverpool.

It is a stick which Klopp has long been accustomed to being beaten with but ahead of their meeting with Tottenham in Madrid, the 51-year-old joked about his record when asked whether he believed in fate or bad luck.

“Do you think I have an unlucky career? All my career was not unlucky,” he said.

“My missus always asks me before the season when is the final game of the season, because we are often in it, so I’m not unlucky.

“I am the world record-holder in the last seven years in winning semi-finals. But if I were to write a book about it probably no-one would buy it.

“If I were to sit in the room and think it is all about me, I am the reason, if I saw myself as a loser, then we would have a problem but I don’t see myself as this.

“If I were to be the reason for losing six years in a row, then everyone needs to worry.

“But we go in a situation where we learn – not from last season’s final as there were three strange goals – a lot from our time together.

“We want to win with all we have and with things that happened in the past I can take confidence from.”

Klopp was asked, as an aside, about his thoughts on UEFA’s proposed changes to the Champions League – which would introduce promotion and relegation across a number of divisions – and which alterations he would like to make.

Continuing his theme he added: “Make the semi-final the final and I am completely fine!

“Make it over two legs and I am completely happy with that.

“I love the competition. For me it is fine.”

Liverpool left Kiev 12 months ago with a feeling of frustration and disappointment after losing 3-1 to Real Madrid courtesy of two bizarre goalkeeping errors and a brilliant overhead kick by Gareth Bale.

They return this year as the favourites, with Tottenham appearing in their first final in this competition.

However, Klopp played down their underdog tag.

“If I were to think Tottenham had an advantage I would be mad and if (Spurs boss Mauricio) Pochettino were to say the advantage was with the Liverpool side he would be mad as well,” he added.

“It is not about having an advantage now, it is about working for that advantage tomorrow.

“I know people say we are the favourites because we had more points in the league, but if you saw the games this season both were really good so there is no advantage before the game.”

Liverpool were boosted by the return to fitness of Roberto Firmino, who has missed the last three matches with a thigh problem.

Klopp confirmed he was fit, although he would not go as far as saying he would start.

“Yes, he’s ready. If he will start… if Poch afterwards says his exact line-up then call me and I will tell you our line-up as well,” he said.

“If not, then I thought I’d keep at least a few question marks open.

“He’s fit, he’s trained, he’s here and if nothing happened from the moment he left the plane until now – I didn’t see him since then – he’ll be fine.”