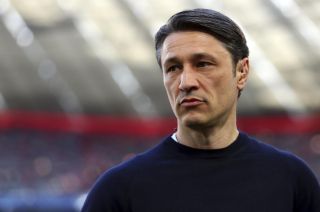 Bayern Munich coach Niko Kovac believes his side “fully deserved” their win over 10-man Werder Bremen but felt they should have made things much more comfortable for themselves.

Bremen lost Milos Veljkovic to a 58th-minute red card but Bayern had to wait until 15 minutes from time to finally make the breakthrough, with centre-back Niklas Sule netting the only goal of the game.

That was enough to send leaders Bayern four points clear of second-placed Borussia Dortmund, who play on Sunday, but Kovac admits his side should really have been celebrating a bigger margin of victory.

Kovac told a press conference, reported by fcbayern.com: “I wish that we would have used the multiple chances we had to get 2-0 or 3-0, but the 1-0 is enough. The win is fully deserved.”

Bremen had come into the match in impressive form, having not lost in any competition in 2019 and having also scored in every one of their Bundesliga matches this season.

Both those records came to an end at the Allianz Arena but Kovac knew his side had been in a battle.

He also admitted the dismissal of Veljkovic for a second booking helped Bayern considerably.

The Bayern boss added: “It was difficult for both teams today. We knew that Bremen are very difficult to play against. We had to play patiently.

“The dismissal has certainly made things easier in the second half. We have three points and are happy that we can celebrate Easter as leaders.”

Bremen boss Florian Kohfeldt, whose side face Bayern again in the DFB-Pokal semi-finals on Wednesday, also felt the red card changed the game.

He said: “I am not dissatisfied with my team at all. We were brave, we threw everything in and we always showed that we wanted to win.

“We got the red card and then it was over.”

Bremen midfielder Nuri Sahin added: “We were brave, we wanted to be brave.

“But if Bayern gets stuck in your half, it’s extremely hard to get out of it because they let the ball run very well and have very, very good positional play.”