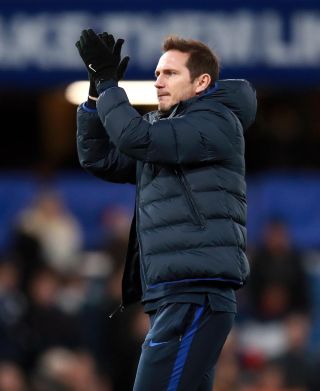 Hudson-Odoi drilled Chelsea’s opener and had a hand in Ross Barkley’s tap-in as the Blues eased past Forest and into the FA Cup fourth round.

The 19-year-old endured a turbulent 2019 that included his England debut, being heavily courted by Bayern Munich, and a torn Achilles tendon.

The Chelsea forward ended an 18-match goalless streak with the opener against Forest as he searches for top form, though, leaving Blues head coach Lampard pleased with his showing.

“It’s a good performance, I was pleased to see him high up the pitch and aggressive in how he wants to get at people,” Lampard said.

“He came back very early from a terrible injury, and there were still issues for some time with him getting absolutely tip-top from that.

“So this was a nice step forward for him. The next challenge will be next time we play, can he do that again?”

Asked how long it takes a player to get back to their best after a serious injury, Lampard added: “It depends on the player and the injury.

“With Callum, when you’re a player of speed and sharpness, that’s one of your main weapons, with an injury that severe that is slightly held back at first.

“He’s done a lot of strength work on that. So now he’s getting close to where he needs to be in terms of his speed and acceleration.”

Lampard used the FA Cup clash as a chance to hand game-time to a host of fringe players, though precious few shone brightly.

The France hitman is a rumoured January target for both Aston Villa and Newcastle, and Lampard reiterated assistant Jody Morris’ words that Giroud could leave this month – but only in the right circumstances.

“There’s no update on Ollie, but I’ve spoken with him,” Lampard said of Giroud.

“If the conditions are that it’s something he really wants to do and it works for the club, for me and the squad then it’s something that could happen.

“But only when all of those bases are covered. So we’ll see if we’re there.”

Danny Drinkwater is back at Chelsea after a loan stint with Burnley, and he could yet be heading out of Stamford Bridge again.

Asked if the former Leicester midfielder could be sent on loan again this month, Lampard said: “We’ll see. It’s a possibility.”

Sabri Lamouchi made nine changes to face Chelsea, with the Forest boss adamant he had to prioritise the Championship fight over an FA Cup run.

“This is my responsibility, and this was my choice,” Lamouchi said.

“We can’t win the FA Cup. And we can’t miss our targets.

“We just want to focus on our goals and to fight until the end.

“If we win or draw here we play at least one more game.

“It’s a serious challenge, to play against a Premier League team, the difference between them and us is massive.

“With my team, with where I am now, in Nottingham Forest, the target, the goal is not to focus on the cup games, but in the league.

“Because the fans, the club, everyone of the Forest community, they want not to win the FA Cup, not to go to Wembley for one more final, they want to get back to the Premier League.

“This is the first target, for everyone at Forest. But you know that better than me; 21 years is too long outside the top division for this club.”