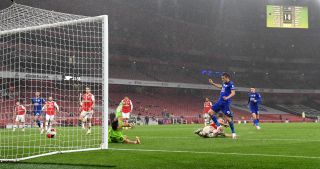 Jamie Vardy hit a late equaliser as Leicester came from behind to earn a point at 10-man Arsenal in a match where VAR was at the forefront.

The Gunners were looking for a fourth consecutive Premier League win for the first time in 21 months but had to settle for a 1-1 draw.

Pierre-Emerick Aubameyang opened the scoring as Mikel Arteta’s side then went on to spurn a host of decent chances.

They were made to rue their profligacy as, following a VAR-assisted decision to send off substitute Eddie Nketiah just four minutes after his introduction, the technology then ruled Vardy was onside as he secured a draw for Brendan Rodgers’ men.

Arsenal’s Emiliano Martinez was the busier goalkeeper in the opening stages and he made a good stop with his feet to prevent Kelechi Iheanacho breaking the deadlock with a driven effort.

A long-range shot from Kieran Tierney tested the handling of Kasper Schmeichel as rain poured down over the Emirates Stadium.

But the Leicester skipper could do nothing to prevent Aubameyang giving the hosts the lead moments later as Bukayo Saka broke the offside trap before bursting forward and playing in a fine cross for the Gabon forward to finish.

Saka, once again shining, forced a smart save out of Schmeichel at his near-post after being slipped in by the recalled Alexandre Lacazette.

Iheanacho thought he had drawn Leicester level 10 minutes before the break but referee Chris Kavanagh had already blown his whistle as the former Manchester City forward had fouled Sead Kolasinac before tucking home Vardy’s cross.

In an increasingly end-to-end affair, Schmeichel held a Lacazette header which the Frenchman should have done better with.

The rain continued throughout the start of the second half, as did Arsenal’s forlorn attempts to add to their advantage.

David Luiz saw a free-kick pushed behind and Ceballos a shot deflected over as Leicester continued to threaten on their much rarer forays forward.

Iheanacho should have done better when picked out by Vardy but could only shoot straight at Martinez.

Lacazette had a goal ruled out for offside as VAR confirmed assistant referee Sian Massey-Ellis was right to put up her flag after he had finished at the back-post.

The VAR, Stuart Attwell, was involved again soon after – recommending Kavanagh use his pitchside monitor following a high, late challenge from Nketiah on James Justin.

The VAR would still have a further part to play, adjudging that Vardy was onside when he equalised for Leicester with six minutes to go.

With Arsenal a man down it was the visitors doing all the pressing to find a late winner.

But the contest would end all-square, the draw meaning Leicester sit fourth – three points clear of Manchester United – while Arsenal edge above Wolves into sixth.