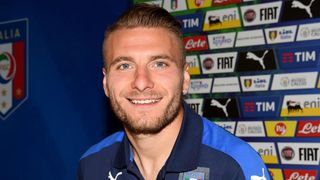 Sevilla have confirmed Ciro Immobile has left the club for Lazio.

The Serie A side were keen to sign a new striker following the departure of Miroslav Klose at the end of last season and they have found their man in Immobile.

The Italy international already underwent his medical with Lazio on Tuesday and Sevilla have now announced the 26-year-old has completed his move.

Immobile had joined Sevilla from Borussia Dortmund ahead of the 2015-16 campaign after an underwhelming spell with the Bundesliga giants, but left the club again for a loan spell with Torino halfway through the season.

He returned to the Ramon Sanchez Pizjuan side at the end of last season, but has now permanently waved farewell to Sevilla as he returns to his native country.

Immobile was part of the Italy squad that made it to the quarter-finals at Euro 2016, making two appearances.

The striker becomes Lazio's second signing of the close season after the previous arrival of Jordan Lukaku from Oostende.