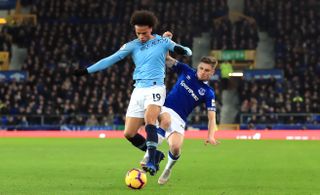 Leroy Sane’s possible departure from Manchester City this summer will not automatically lead to the club dipping into the transfer market for a replacement as manager Pep Guardiola indicated he has “other priorities”.

Guardiola revealed on Friday afternoon that Sane has rejected numerous offers of a new contract and wants to move elsewhere, with Bayern Munich hotly tipped to end the German winger’s four-year stint at the Etihad Stadium.

But with one year left to run on his existing deal, Sane’s imminent exit is not a formality. Neither, it seems, is Guardiola’s rush to source an alternative from another club as he believes he already has options at his disposal.

The Spaniard admitted the financial uncertainties caused by the coronavirus pandemic will dictate his transfer plans but there has been wide speculation that he is looking to shore up his back-line in the coming months.

“Most of them, they are in good and healthy condition, like Phil, Gabriel and Raheem, they can play regularly for a long time. They are so stable in terms of injury situations so I think we have other priorities.

“But after coronavirus, the situation economically, financially for clubs is changing so I don’t know what is the situation. We are going to see at the end of this season.”

As for whether he will definitely attempt to sign a defender when the transfer window opens at the end of the season, Guardiola laid the challenge down to his existing players to prove their worth.

He said: “I don’t know because it depends on the people who stay and maybe the last two months that they make a step forward and we decide to continue with the same people. I don’t know right now.”

One of those players is Benjamin Mendy, whose time in the north west has been disrupted by injuries and a loss of form, but the full-back was one of the standout performers in the midweek win over Arsenal.

Yet Guardiola, speaking ahead of Monday evening’s game against Burnley, is not getting carried away and wants the Frenchman to deliver on a more consistent basis.

“He has special qualities – his energy, his potential, as a left-back he is an extraordinary player but we cannot forget it was just one game,” Guardiola said.

“It is true that he came back so fit. After this lockdown in the first days he is focused but with him you just have to wait a little bit and hopefully he can play this period regularly.

“He loves to play football, being on the pitch, he’s a guy who plays without pressure and handles it really well. But we have to wait, it was just one game.”

It has been reported that City might be among several top-flight clubs who will not take part in the Carabao Cup next season, with its early rounds potentially clashing with the conclusion of the Champions League in August.

Given City have won the League Cup for the last three seasons, Guardiola wants to go for a fourth successive crown but he was not unequivocal when asked whether his side would definitely take part.

“It will be nice to play it,” he said. “It’s a competition we’ve won three times in a row, so we would like to defend this title on the pitch.

“But the situation of Covid-19 and the Premier League starting later, I don’t know, it depends on the calendar. We will love to play it but the situation is exceptional.”