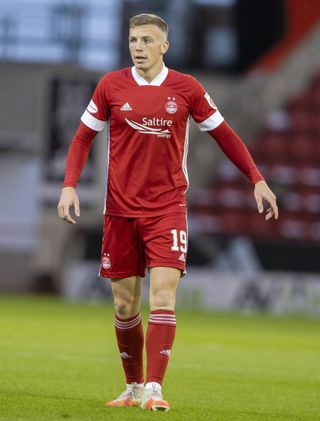 Lewis Ferguson revealed his burgeoning midfield partnership with Aberdeen new boy Ross McCrorie has been years in the making.

Derek McInnes has paired his new recruit from Rangers alongside Ferguson at the heart of the Dons midfield since luring 22-year-old McCrorie from Ibrox last month.

But it is not the first time Ferguson has lined up beside the Scotland Under-21 skipper.

The duo first met during their days in the Gers academy and have also seen action together for Scot Gemmill’s young Scotland side.

While Ferguson joined Hamilton after being released by Rangers at 14, McCrorie decided himself it was time to move on from Rangers this summer after finding first-team opportunities limited under Steven Gerrard.

But after reuniting in the Granite City, Ferguson believes their childhood bond will ensure they become the main men at Pittodrie.

He said: “I’ve enjoyed hooking up with Ross these last few games.

“I’ve known him for a long time. I first came across him when I was playing pro-youth with Rangers. Ross was the year older than me but we played together a few times and got to know each other.

“I’ve met up with him more recently when we were both included in Scotland Under-21 camps.

“So I knew what type of player he was and what he’s like as a boy.

“It’s definitely made it easier forming a partnership. You know what it’s like when a new boy comes in that you’ve never had a relationship with and maybe haven’t even seen them play before.

“But Ross I and know exactly what each other is like having played with each other since we were young.

“That’s helped. We’ve formed a decent partnership in the middle of the park. We both offer different things as well as a few similar things.

“We’ve fed off each other so far. The first couple of games where we have played as a partnership I think we’ve made each other play better.

“Everybody in the changing room also raises their game when you get a new signing in, especially a big one like Ross.”

There will be 300 fans there to cheer on the Dons as they look to make it five wins on the bounce against Kilmarnock on Saturday.

Ferguson added: “Killie will be on a high after beating Dundee United before the international break but we’re in the same boat as them.

“We’re going into the match on the back of a good result ourselves, so both teams will be high on confidence.

“Hopefully we can put on another winning performance for the fans who will be there.”