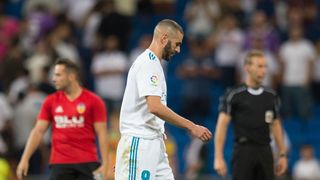 During Madrid's 1-1 Champions League draw against Tottenham on Tuesday, former England striker Lineker tweeted to claim Benzema was "a tad overrated" and "decent, not great".

The 29-year-old Frenchman endured a frustrating outing in front of goal in midweek, with compatriot Hugo Lloris completing a remarkable save from a close-range header to ensure Benzema's tally for the season remains on two from eight matches in all competitions.

Speaking ahead of Madrid's LaLiga match with Eibar on Sunday, Zidane said it was unrealistic for Benzema to provide prolific returns on a par with Cristiano Ronaldo.

But he labelled his forward as the best man to lead the line for Madrid – a pointed observation given recent speculation suggesting Spurs' Harry Kane could be on Madrid's radar.

"It's not just Karim, he's annoying me with [what he says about] Karim because, for people who know football, it's embarrassing," Zidane said, addressing the views of one-time Barcelona forward Lineker.

Is it me or is Benzema a tad overrated? A goal every other game in a team as strong as Real Madrid is nada especial. Decent not great.October 17, 2017

"It bothers me when people talk badly about my players. For me, Benzema is the best.

"For me, a striker doesn't only need to score goals. Karim has everything, not only the goals.

"If Karim has been at Real Madrid for almost 10 years it's not an accident. He always recovers from everything, always shows his qualities.

"On the pitch, he is the best. He has everything. Every quality for a footballer. He could improve, he knows, and he works for it. When he scores more goals, he will be happier".