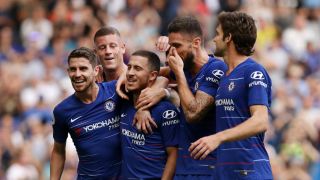 Liverpool and Chelsea have made Premier League history by each winning their first five matches of the new season.

Both clubs took perfect records into the international break and maintained their momentum with top-flight victories on Saturday.

The Reds earned a 2-1 win at Wembley against Tottenham, while Maurizio Sarri's side came from behind to thump Cardiff City 4-1 at Stamford Bridge, thanks to an Eden Hazard hat-trick.

Watford had also taken 12 points out of 12, but Javi Gracia's Hornets lost for the first time this term by going down 2-1 at home to Manchester United.

Chelsea, who lead Jurgen Klopp's side in the table on goal difference, make the short trip to West Ham a week on Sunday in their next league game.

Liverpool will have the chance to claim top spot, though, as they host Southampton at Anfield on Saturday, while both clubs play in Europe first.