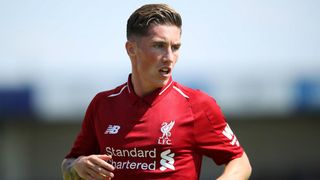 Harry Wilson has signed a new long-term deal with Liverpool.

The Wales international came through the Premier League club's youth system and, after scoring regularly at under-23 level, spent the second half of the 2017-18 season on loan at Hull City.

Wilson - who only signed his last contract extension at Anfield in January - managed seven goals during his temporary stint in the Championship.

The 21-year-old forward found the net twice in Liverpool's opening pre-season friendly on Saturday too, as Jurgen Klopp's side recorded a 7-0 victory over Chester.

"When it got offered to me, I was desperate to get everything sorted so I could sign it fairly early on in pre-season because I want to focus on playing football.

"So, now this is sorted, I feel I can do that and push on and try and impress."

has signed a new long-term contract with the Reds.Full story: July 10, 2018