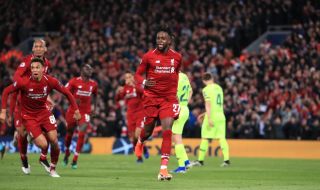 Striker Divock Origi has played a pivotal, if limited, role in Liverpool’s season and, after the drama of a Champions League win over Barcelona, he is not ruling out one more twist in the title race.

The Belgium striker has scored just six goals this season, but four of them have been vital: December’s 96th-minute Merseyside derby decider, the 86th-minute winner at Newcastle on Saturday and two in the 4-0 demolition of Barca to help book a second successive final appearance.

Boosted by turning around a 3-0 first-leg deficit against the favourites, Liverpool now head into Sunday’s Premier League season finale hoping Brighton can do them a favour by taking points off Manchester City to pave the way for Jurgen Klopp’s side to snatch the title with a win at home to Wolves.

Hardly anyone will give 17th-placed Brighton a chance against Pep Guardiola’s leaders, who are one point ahead of Liverpool, but then very few thought such a turnaround was possible against Barcelona.

“I think we are in a good moment, but we have to stay focused,” said Origi, who was only in the team on Tuesday night because of injury to Roberto Firmino and Mohamed Salah.

“It is not finished yet. We are qualified for the final, but now we have another game this weekend against Wolves.

“It is going to be very difficult (to win the title), but anything can happen.

“We just have to enjoy it like we did against Barcelona, there’s nothing more we can do, and at the end of the day focus on being the best we can.”

Origi’s season has taken a distinct turn for the better in the last five months.

Prior to his match-winning substitute appearance against Everton on December 2, the 24-year-old had played just 11 minutes after coming off the bench in the Champions League defeat at Red Star Belgrade.

Having spent the previous season on loan at Wolfsburg, which began promisingly with four goals in his first 10 matches but tailed off after Christmas, his future at the club was in serious doubt.

However, Origi has stuck to his task and he has got his rewards in the last couple of games, none more so than with a starring role against Barcelona in probably the greatest European game Anfield has witnessed.

“First of all, me being a believing Christian, I always have hope,” added the striker.

“Second, when you look at the team we have a mixture of talent and just hard work and with the fans you knew it would be a special night.

“It wasn’t going to be easy, we didn’t have any guarantees and had to be brave and take a lot of risks.

“In the end winning 4-0 is something you still have to digest, but we do realise it was a special night and are going to the final.”