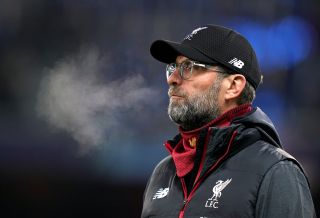 Premier League leaders Liverpool could clinch a first title in 30 years against Everton on June 21 after the first batch of fixtures of the restart were confirmed.

Jurgen Klopp’s side need a maximum of two wins to secure the top division crown and are due to play the Merseyside derby in their first game since football was halted in March.

If Arsenal beat Manchester City on June 17 – the date of the season’s resumption – Liverpool can win the title by beating Everton.

The venue is still unclear as it was scheduled to be played at Goodison Park, but was included on a list of matches which local forces had asked to be moved to neutral venues.

The Premier League will resume on June 17 after a 100-day hiatus because of the coronavirus pandemic.

Aston Villa will kick-off the second part of the season when they host Sheffield United, their game in hand on their relegation rivals, at 6pm before City welcome Arsenal later that evening.

Tottenham will host Manchester United on Friday June 19, with Southampton travelling to Norwich on the same day.

The Premier League’s first weekend back over June 20 and 21 will also see Watford host Leicester on BT Sport.

Our return to @premierleague action will begin with the Merseyside derby on Sunday 21st June.— Liverpool FC (at 🏠) (@LFC) June 5, 2020

The channel will also broadcast the first live 3pm Saturday fixture in the top flight – Brighton against Arsenal.

West Ham host Wolves on Sky at 17.30 with struggling Bournemouth hosting Crystal Palace at 19.45, live on the BBC.

It is the first time since the Premier League started in 1992 games will be shown live on terrestrial television.

Chelsea resume when they travel to Villa Park at 16.15 on Sunday June 21 and Newcastle host Sheffield United earlier in the day.

Burnley complete the opening round of the re-start with a trip to Manchester City on June 22.

Sky Sports will make 25 of their top-flight matches free to air while Amazon Prime’s four matches will also be broadcast for free.

The BBC has not broadcast a live top-flight league match since 1987-88.

In other key fixtures, Liverpool are due to host Crystal Palace on June 24 in a game which could win them the title, if they have not wrapped it up already.

Liverpool’s trip to Manchester City has also been pencilled in for July 2, although the venue is yet to be confirmed as it is one of the games which could be moved to a neutral stadium.

Struggling Villa host Wolves on June 27, bottom side Norwich go to Arsenal on July 1 and Bournemouth, in the final relegation spot, face Newcastle on the same day.