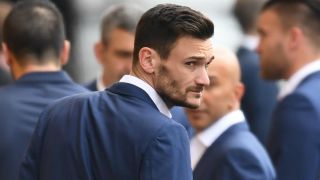 France captain Hugo Lloris is confident that his national team heartbreak in the Euro 2016 final will spur on his hunger for success with Tottenham.

The goalkeeper was in imperious form throughout the European Championship but there was no fairytale ending for France on home soil as Portugal snatched the win in extra time through Eder's long-range strike at the Stade de France.

Goalkeeper Lloris expressed his disappointment at missing out on glory but plans to use his pain to drive him on to success with Tottenham, who are looking to build on a third-place finish in the Premier League last season.

"It was a big and long season and unfortunately, without a trophy with Tottenham and France," he told The Mirror.

"But I can be proud to take part in Tottenham's season and the French national team's adventure.

"I hope it will be give me more hunger for next season."

Lloris added: "You always need to look forward. It's true that it's a big frustration and a disappointment," he said.

"But in football you always need to be positive and keep your chin up, especially when you've done your best."