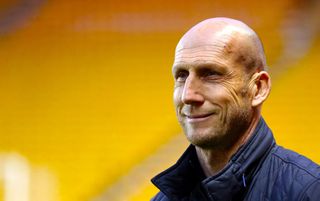 Rangers begin their Europa League Group G campaign with a home clash against Eredivisie side Feyenoord.

Former Manchester United and Holland defender Jaap Stam was brought in over the summer to replace ex-Rangers player Giovanni Van Bronckhorst at the helm. Stam’s first foray into management saw him spend just under two years at English side Reading, where he was a penalty shoot-out away from reaching the Premier League at the end of an impressive first campaign. But he could not replicate that success in his second season and his exit followed in March 2018, with the club’s Championship status at risk. Stam was named PEC Zwolle boss in December last year and made a strong start, winning his opening three games. And in March it was announced he would take over from Van Bronckhorst following the conclusion of the 2018-19 campaign. Stam’s trend of starting strongly in new jobs has continued as Feyenoord have yet to taste defeat under him.

Steven Berghuis was not given much of a chance to impress during his two-year spell at Watford, with all nine of his Premier League appearances coming from the bench. But the winger has shown what he is capable of since joining Feyenoord, initially on loan in his final year at Watford before making his move permanent two years ago. The Holland international poses a real goal threat, having scored 33 times in 68 league games since the summer of 2017, and Rangers will need to be wary of him. A knee injury forced Berghuis to miss the weekend win over ADO Den Haag but he looks set to return in time for Thursday’s clash.

After starting the Eredivisie season with three straight draws, Feyenoord have won their last two matches to remain unbeaten. But they conceded two late goals in their 3-2 win on Sunday, giving Rangers hope there might be gaps in their defence they can exploit. The Dutch side were convincing winners in their two Europa League assignments so far this season, beating Dinamo Tbilisi 5-1 on aggregate in the third qualifying round before seeing off Hapoel Be’er Sheva in the play-offs with a pair of 3-0 wins.

The two sides met for the first time in the 2001-02 UEFA Cup when Feyenoord last lifted the trophy. Their fourth-round tie began with a 1-1 draw at Ibrox before a brace from former Celtic man Pierre Van Hooijdonk inspired Feyenoord to a 3-2 victory in the second leg.