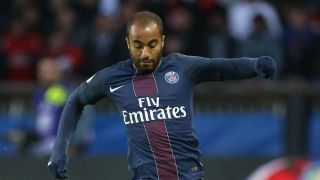 Lucas Moura wants to stay at Paris Saint-Germain and fight for his place, but admits he will be helpless if the club do not want to keep him.

Lucas has progressively made more starts in Ligue 1 since arriving from Sao Paulo in 2013, but he only played the full 90 minutes on 10 occasions in the previous top-flight campaign.

The 23-year-old has been linked with a move to Liverpool but is keen to remain at the Parc des Princes and push for more time on the pitch, but he is unsure if the wishes of the club match his.

"I keep the same mentality to help the team. I want to play and start, as all players do. I'm not different," Lucas told L'Equipe.

"I'll give everything to start. There will be competition but I can help the team a lot.

"No [I haven't thought about leaving], I'm happy here. I love the club and Paris. I have said I want to stay here and write my story, but it also depends on the club.

Unai Emery has replaced Laurent Blanc at the helm ahead of the 2016-17 season, and Lucas feels the new boss will make PSG a more tactically proficient side.

"He is very interested in position the team tactically and physically. It is important to work on the tactical system of the team," said the Brazilian.

"It was a problem for me before, and now I think we will be more organised on the pitch."