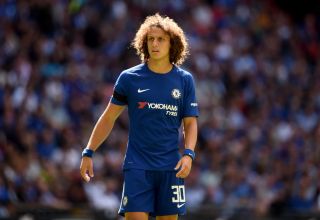 Sarri has come in for heavy criticism this season with fans unhappy at his style of play, while a spectacular downturn in results saw them fall off the title pace.

They were neck-and-neck with ­Manchester City and Liverpool for the first couple of months but went on to suffer a 4-0 defeat by Bournemouth and a 6-0 drubbing at Manchester City.

Goalkeeper Kepa Arrizabalaga’s refusal to be substituted in the Carabao Cup final penalty shoot-out defeat by City looked likely to spell the end for Sarri.

However, Chelsea recovered to finish third and have the chance to end a topsy-turvy campaign with some silverware in Wednesday’s Europa League final against Arsenal.

Sarri’s future remains up in the air but defender Luiz feels he should take enormous credit for his first season in charge.

“We started very well, everyone was very excited saying Chelsea are going to fight for the title.

“Then we had some ups and downs but we finished the season, especially in the Premier League, very well and we have another opportunity to win this competition.

“He is trying to teach us his philosophy of football. It is part of the job. He has to try to teach us to understand his mind, the way he looks at football, and I think he is doing great.

“If you think one day you already know everything that is when you are going to fall down. It doesn’t matter what job; footballer, coach, we need to try to learn and to improve every single day.

“Football is about this. Big clubs have pressure and if you don’t want pressure don’t be at the big clubs.”

Chelsea have already qualified for next season’s Champions League but Arsenal need to win in Baku in order to join them.

Luiz insists that will not be a factor, adding: “It’s going to be a massive game, a great final against a fantastic team.

“Will they be more motivated? I don’t think so. We are motivated a lot to win this trophy.