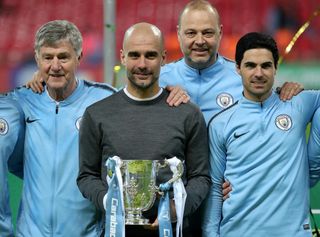 Pep Guardiola has suggested scrapping the League Cup in an attempt to ease the fixture burden on players.

The Manchester City manager has been a vocal critic of the scheduling this season, particularly over Christmas, arguing on behalf of all clubs that players have not had enough recovery time between games.

Guardiola believes clubs should play fewer games and the Premier League fixture list should be more balanced. He would be prepared to sacrifice the League Cup despite City’s recent domination of the competition.

City, who lead Manchester United 3-1 after the first leg of their semi-final, are bidding to win it for a third year in succession and a fifth time in seven seasons this term.

Asked what the solution should be, Guardiola said: “Eliminate competitions, take out this competition.

“So less games, less competitions, less teams, more quality, less quantity. People can live without football for a while. It’s too much (now).

“Start later the season after the summer time. We have one game a week for a long time and then after we start with two or three in one week.

Two of England’s key players in Harry Kane and Marcus Rashford are facing injury lay-offs that could harm their hopes of playing in Euro 2020 the summer.

Guardiola believes they are victims of the schedule and thinks authorities are not doing enough to lighten players’ workload.

He said: “With that number of games, players break down. I’m not surprised. I’m so sorry for Kane and Rashford.

“They should reflect (on) it but all the managers complained about it and they don’t care. A distance of two or three days again and again. The players suffer.

“They want to do well and the clubs have a lot of pressure to win or qualify for the Champions League and we push and push. The body says stop, it’s enough.”

Guardiola, however, recognises there are other considerations and wishes the year could be longer.

He said: “I think the solution is you have to make a year of 400 days! Then we can book another competition. UEFA or FIFA can talk about it. We have few days a year, that’s the problem.”

Guardiola says Laporte is “getting better every day” but Stones and Mendy are injury doubts for the trip to Sheff Utd #MCFCpic.twitter.com/wSIKM6E4V3— Andy Hampson (@andyhampson) January 20, 2020

City are out of the Premier League title race this season after failing to keep pace with leaders Liverpool. The targets are now to finish second and succeed in the Champions League and domestic cups.

In doing so, Guardiola admits futures are on the line for himself and players.

He said: “Everything is related to the performance, not about the contract we have or what we are.

“We have to take the results and perform your best. For me as a manager I’m being observed and the same for the players.”

One undoubted cornerstone of the side is Raheem Sterling, although his form his dipped in recent weeks after a fine start to the season.

Guardiola said: “He has played more than 3,000 minutes. His standards are continuing quite similar. Maybe he hasn’t scored in the last games but there are no doubts.”