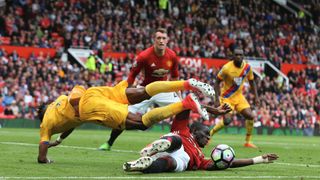 The youngest side in United's Premier League history won 2-0 on Sunday courtesy of first-half strikes from debutant Josh Harrop and Paul Pogba.

Palace had to substitute former United winger Zaha due to injury with 11 minutes left and Allardyce felt he did not receive proper protection from the officials throughout the match.

Zaha was fouled nine times in the game, with Scott McTominay and Michael Carrick being booked for two of those challenges.

"Wilfried Zaha got battered by not being allowed to play his normal game," Allardyce told reporters.

"There was a lack of protection for him and he had to come off injured. He was tripped, kicked, pushed and fouled.

"I am disappointed in the referee that he did not handle the situation better."

United scored with their only two shots on target, while Palace hit the post through Christian Benteke's header in one of their only chances of note in a match that saw goalkeepers Joel Pereira and Wayne Hennessey rarely tested.

"They had two shots in the whole game - so defensively we did very well," added Allardyce.

"We conceded two sloppy goals and creativity wise it was not good for us. That means Man United ran out the winners. Our first half was average, then we had a go in the second half and did a lot better."

SA: We'll be making decisions on a few players in the coming days, then dipping into the transfer market.May 21, 2017

Allardyce, though, reflected positively on a season that saw Palace avoid relegation following his arrival at the end of December.

"We have all worked extremely hard from the owners support throughout the whole football club," he said.

"My job was to lift everyone on the pitch and behind the scenes and get working in the right direction. With the investment in January, very, very, very good performances came and that is why we stayed in the Premier League.

"Beating Chelsea away, Arsenal at home and Liverpool away in the space of a few days, had we not got them we would have been relegated. They were the big ones.

"We now need to grow, develop and invest. You need to choose the right players and not the wrong ones. Recruitment is the difficult task in the summer. Any players we bring in have to be better than the ones we have now."