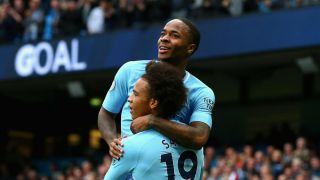 Free-scoring Manchester City added to Crystal Palace's mounting misery with a 5-0 win at the Etihad Stadium, a result that sent Pep Guardiola's men top of the Premier League.

Palace are the only team without a goal in Europe's five major divisions this season after a sixth straight top-flight defeat, and the scale of the task facing the recently appointed Roy Hodgson is thrown into a stark light by a fixture list that places Manchester United and Chelsea next on their agenda.

Contrary to the final scoreline, Hodgson's men acquitted themselves well in the first half and should have led through Ruben Loftus-Cheek before a splendid opener from Leroy Sane arrived a minute before half-time.

Raheem Sterling's quickfire second-half brace put the result beyond any semblance of doubt and an overworked Wayne Hennessey in the Palace goal was unable to keep out Sergio Aguero's 79th-minute header from Sane's cross.

The goal moved Aguero to within one strike of Eric Brook's all-time club scoring record of 177 and an excellent fifth from substitute Fabian Delph extended the goal-difference advantage Guardiola's side enjoy over Manchester United at the summit to four.

How many more goals 'til you're the Club's all-time record goalscorer, ? September 23, 2017

Despite the array of City attacking talent on the field, they almost opened the scoring courtesy of a Palace defender in the seventh minute when Mamadou Sakho headed Kevin De Bruyne's testing cross against his own post.

Guardiola's side were not operating with the pleasing fluency of their recent outings but should have led in the 12th minute, with Fernandinho blasting straight at Hennessey after Nicolas Otamendi's attempt from a right-wing corner dropped to him seven yards out.

Hennessey was operating behind an amply stocked defence, well drilled by Hodgson, whose team nearly led in the 19th minute.

Ruben Loftus-Cheek let fly from the edge of the area and his shot clipped a lunging Otamendi before bouncing clear off Ederson's right-hand post.

Loftus-Cheek then spurned a glorious chance on the end of Andros Townsend's deflected cross and an uncomfortable period for City was compounded by left-back Benjamin Mendy limping off with a knee injury.

Aguero lifted over left-footed when Sane presented him with the chance to score his 176th goal for the club before the Germany international took matters majestically into his own hands, touching David Silva's chipped return pass over Scott Dann and slotting home on the half volley.

Sane turned provider six minute into the second period, Silva sliding a pass down the left channel for him to send over a low cross and hand Sterling a simple finish.

The England winger should have doubled his tally when he blasted into the side-netting shortly afterwards and Aguero shot too close to Hennessey at the end of a solo run.

Those two players combined to make it 3-0 before the hour – Aguero knocking De Bruyne's raking ball back across goal for Sterling to convert.

Palace were rocking and Aguero released Sane into the box, where Hennessey stood firm despite his earlier protection having evaporated.

Guardiola remonstrated extensively after a Sane penalty claim fell on deaf ears with 15 minutes to play, but it is his slumped counterpart in the opposite dugout who could reflect on more genuine reasons for anguish by the time Aguero got in on the act.

Hodgson handed Delph his England debut in 2014 but would have rather not seen a career that has stalled through fitness woes in Manchester show a dazzling spark a minute from time as he cut inside and looped a right-footed shot into the top corner.