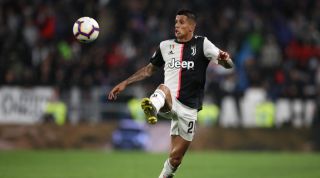 Allegri took charge of Juve for the final time in a 2-0 defeat to Sampdoria on Sunday, and the identity of his replacement remains a mystery.

According to Turin-based newspaper Tuttosport, the futures of Cancelo, Paulo Dybala, Miralem Pjanic and Douglas Costa are dependent on who steps into the vacant coaching position.

Portugal international Cancelo has caught the attention of United, who are chasing a new right-back, while City are said to be considering a €60 million (around £53 million) bid, depending on the result of UEFA’s investigation into potential Financial Fair Play violations.

Atletico Madrid are understood to be considering Dybala as a replacement for Antoine Griezmann, while PSG have been linked with Pjanic and Costa could make a move to the Premier League.

Cancelo joined Juve from Valencia last summer after a season-long loan at Inter and made 25 appearances for the Italian champions this season in Serie A, scoring one goal and providing five assists.