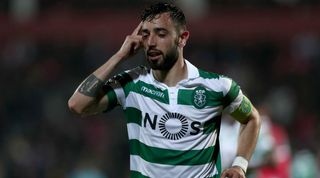 In an interview with Sport TV, Fernandes has spoken out about his future.

Last June, the 24-year-old was among a number of players who terminated their contracts at Sporting after a group of fans attacked players at the training ground – but reversed his decision after the departure of controversial president Bruno de Carvalho.

“Last year after the termination I received approaches, mainly from England and also from Spain, but I didn't feel prepared to go,” Bruno Fernandes told Sport TV.

“Not because of difficulty, but for the high number of games in England.

“My debut season at Sporting was the first time I played so many games, and I thought I needed one more with that regularity. Now I feel prepared for this requirement, if I ever have to play in England or a team in Spain.”

Fernandes has now scored 28 goals this season, breaking Frank Lampard's record for goals scored by a midfielder in a single season.

Record report that Manchester United watched Fernandes in his last match, along with PSG and Juventus.

The Portuguese midfielder has a €100m release clause that he believes "no player should be worth".

Ronaldinho: "I was 48 hours from joining Man United... and then Sandro Rosell called"