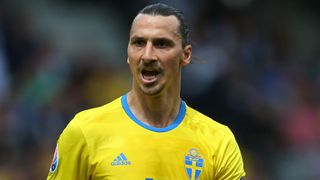 Zlatan Ibrahimovic has rarely been associated with humility, and that appears unlikely to change as he makes the move to Manchester United.

Ibrahimovic announced on Thursday that Old Trafford will be the next destination in a glittering career that has seen him win titles in four different European leagues.

The news, while yet to be confirmed by United, was followed by the impending arrival of the Swede being visibly publicised in Manchester, via a means that poked fun at neighbours City.

When Carlos Tevez made the move from United to City in 2009, the blue half of Manchester made sure to enjoy the moment, unveiling a poster of Tevez celebrating with the caption 'Welcome to Manchester' in the Deansgate area of the city - just over two miles from Old Trafford.

Now the favour has been returned, with a similar poster featuring the former Paris Saint-Germain striker appearing above City's club shop on Market Street, the caption reading: 'Manchester, Welcome to ZLATAN'.

City have held the bragging rights in Manchester in recent times, United fans hoping Ibrahimovic can live up to the billing and change that in the coming season.