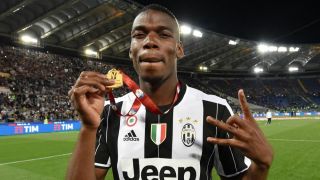 Juventus general director Giuseppe Marotta insists his club have received no contact from Manchester United despite the reported interest in Paul Pogba.

The English giants are reportedly preparing a bid in the region of €100million to bring the midfielder back to Old Trafford, where he left on a free transfer in 2012 having made just three league appearances under former manager Alex Ferguson.

United have already done business with Pogba's agent, Mino Raiola, having signed another of his clients already this off-season, with a deal bringing Henrikh Mkhitaryan from Borussia Dortmund.

But despite all this, Marotta said there had been no correspondence with the Premier League outfit.

When asked on Sportitalia, Marotta simply said there had been "no contact" with United about Pogba, denying a transfer was imminent.