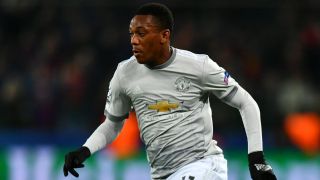 Thierry Henry, France and Arsenal's record goalscorer, believes Anthony Martial is a better player than he was at the same age.

Martial, 21, moved to Manchester United from Monaco in 2015 for a fee that could rise to as much as £58million - at the time making him the most expensive teenager in history.

Henry was 21 and already a World Cup winner when he moved to Arsenal from Juventus in 1999, before going on to surpass Ian Wright as the Gunners' most prolific marksman.

Despite his excellent early-season form for United - with five goals in nine appearances across all competitions despite only four starts - Martial was left out of Didier Deschamps' squad for France's World Cup qualifiers against Bulgaria and Belarus.

Blessed with blistering pace and regularly used out wide on the left, Martial has often been compared with his compatriot, who feels the younger man is ahead of where he was at a similar point in his career.

"Anthony Martial is a far better player than I was at that age," Henry said.

"Martial can be world class."