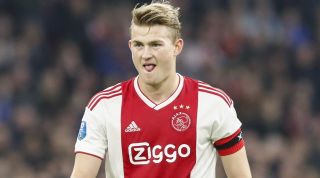 Manchester United turned down the chance to sign Mattijs de Ligt because they were told he would become too fat, writeThe Daily Mirror.

The Ajax centre-back is being chased by several European giants after a superb season in which he captained the Dutch club to the Champions League semi-finals for the first time since 1997.

United are reportedly interested in signing the 19-year-old this summer, with Barcelona and Liverpool among his other suitors.

But it has now been revelead that the Red Devils missed out on De Ligt last season due to concerns over his weight.

United's Dutch scout Marcel Bout recommended the defender to the club's hierarchy after watching him closely for Ajax and the Netherlands.

However, Bout warned United that De Ligt's father was overweight and predicted that the youngster would encounter similar problems as his career progressed.

Jose Mourinho made the Dutchman his leading defensive target last summer, but the United board vetoed the move because they feared De Ligt would lose his pace and power.

Ole Gunnar Solskjaer's side conclude the campaign with a home game against Cardiff on Sunday.