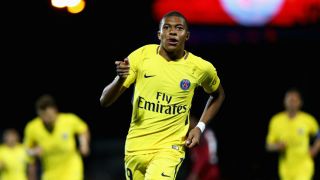 Kylian Mbappe, Ousmane Dembele and Gabriel Jesus were named the top three for the 2017 Golden Boy award on Saturday.

Paris Saint-Germain's Mbappe and Barcelona forward Dembele were considered the leading contentders for the honour, which is handed to the best under-21 player in Europe.

Manchester City's Jesus also made the cut as the 25-man shortlist for the award, run by Italian newspaper Tuttosport and voted for by a panel of journalists, was narrowed down to the leading trio.

Mbappe led the way as Monaco claimed the Ligue 1 title last season before his switch – initially on loan – to PSG.

Dembele enjoyed a fine Bundesliga campaign with Borussia Dortmund and made the move to Barca for a reported €105million in August, only for a hamstring injury to sideline him with the LaLiga giants.

Jesus appears to be an outsider despite his fine start to life at City, having scored 15 goals in 22 matches in all competitions since his arrival from Palmeiras.

Last year's winner Renato Sanches and Manchester United star Marcus Rashford were among those missing out on a spot in the final three.