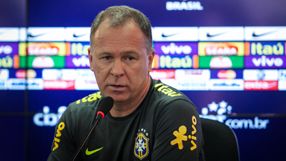 The South American Football Confederation (Conmebol) said on its website (www.conmebol.com) that the countries had agreed to make a new attempt to play the match, which was called off after the teams had taken the field and lined up for the anthems.

Conmebol, however, said the date and venue of a future meeting have yet to be decided.

"I haven't experienced anything like this for a long time, the last time was probably with a junior match in the interior of Rio Grande do Sul (state)," Menezes told the Estado de Sao Paulo newspaper in an interview.

"Football's image has been damaged...the supporters are the most important part of the game and they were disrespected by the Argentine Football Association's (AFA) decision to take the game to a stadium which didn't offer conditions for a game of this standard.

"It's not right to submit the visiting team to a situation like this and, obviously, you shouldn't subject the fans to waiting for a game that never happened."

The AFA had chosen the Centenario stadium in the northern city of Resistencia for the game in which both teams had agreed to field only players from domestic leagues.

The stadium, which has a capacity of 35,000, is used as the home venue for Sarmiento de Resistencia which play in the Torneo Argentina B, the fourth tier of Argentine football.

The teams spent more than half an hour on the pitch warming up and chatting among themselves until they were led off again.

"It would certainly have given us important help in evaluating players and it was frustrating to have travelled there for a game which did not happen," added Menezes.

The Brazilian media are already criticising the team's preparations for the 2014 World Cup, claiming they should be facing stronger opposition.

Brazil thrashed China 8-0 last month and also hosted South Africa who they beat 1-0. They will play Iraq and Japan this month.