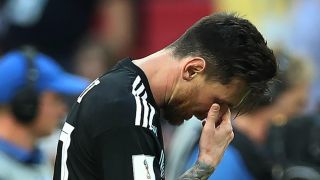 Striker Sergio Aguero was quick to jump to Lionel Messi's defence after his penalty miss cost Argentina the chance to make a winning start to the World Cup.

Aguero opened the scoring in Argentina's Group D 1-1 draw against Iceland in Moscow on Saturday before Alfred Finnbogason hit back with Iceland's first World Cup goal.

It was also Aguero's maiden strike at the tournament, but Argentina could not claim all three points, Messi seeing a second-half penalty saved by Hannes Thor Halldorsson.

Messi had 11 shots without scoring - setting a new Argentina record for the World Cup - and was dejected at the final whistle.

A Messi hat-trick in a qualifier against Ecuador booked Argentina's place at Russia 2018 and Aguero offered his support to his fellow forward.

"Leo is normal, he is human," the Manchester City striker told TyC Sports.

"Today we have to be with him, we know that at any moment he can define a match.

"The first match is always difficult. Argentina want to win against everyone.

"I hope that the Croatia game can be better."

"It's not the best feeling," Argentina's record appearance holder said.

"We wanted to win, we tried everything and we could not. It's never easy to play the first game, but you have to keep going.

"This is just beginning, it's not allowed to fall, but it has not been our day.

"We knew of the difficulty with a rival who defends with people back, very close.

"We made it all uphill, we thank the fans and we ask them to continue supporting us. we are going to need them."