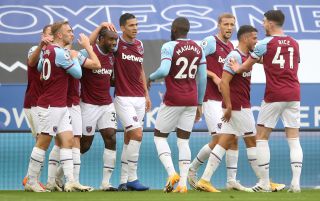 Michail Antonio was on the scoresheet again away from home for West Ham as they brushed aside a lacklustre Leicester 3-0 at the King Power Stadium.

The 30-year-old opened the scoring early on and became the first Hammers player to score in five consecutive top-flight away matches since Mike Small in 1991.

Pablo Fornals doubled the lead before half-time and Jarrod Bowen added some shine to the victory late on after Declan Rice had also struck the crossbar.

Leicester were looking to win their opening four league games for the first time in their history but Brendan Rodgers’ side were never allowed to get going by the visitors, who had Alan Irvine in the dugout once again in the absence of David Moyes.

Ayoze Perez replaced the injured Dennis Praet in the only change for Leicester, while James Maddison was absent from the squad with a calf problem. Recent signings Wesley Fofana and Cengiz Under were included in the squad for the first time and both were on the bench.

Vladimir Coufal was handed a debut for the Hammers following his move from Slavia Prague.

West Ham took the lead after 14 minutes through Antonio. The forward took a quick free-kick after he was fouled by Caglar Soyuncu out wide on the right. He switched play with a cross-field pass to Aaron Cresswell and made a run for the far post, where he was on hand to head home Cresswell’s curling pinpoint cross.

Leicester struggled to break down an organised Hammers defence as their neat build-up play lacked an incisive final pass around the penalty area.

The visitors were having no such problems and Bowen saw his goalbound effort deflect off Soyuncu’s last-ditch sliding challenge and loop onto the roof of the net.

West Ham doubled their lead after 34 minutes. Cresswell’s long, high clearance forward was brilliantly brought under control by Fornals, allowing him to advance into the penalty area and beat Kasper Schmeichel down by his near post.

Leicester had their first real effort of any note at the start of the second half when Harvey Barnes hit a volley wide following a poor clearance by goalkeeper Lukasz Fabianski.

However, the Hammers’ deep defensive line largely continued to deny the hosts space and they remained dangerous on the break through Antonio and Fornals.

That combination would likely have brought a third goal had Jonny Evans not blocked Fornals’ effort inside the six-yard box, following Antonio’s low cross.

Rice came close to making it 3-0 midway through the second half. The midfielder made a surging run towards goal, holding off Nampalys Mendy for much of the way, after receiving the ball inside his own half and hit a shot inside the penalty area which struck the underside of the crossbar.

The seemingly inevitable third goal did arrive seven minutes from time. Fornals’ pass in behind the defence cut Leicester open again and Bowen darted through to finish neatly past Schmeichel and ensure another emphatic Premier League victory for West Ham, following their 4-0 success against Wolves last weekend.

Leicester’s day was summed up in stoppage time when Jamie Vardy, largely anonymous for the entire match, finally got some decent service but clipped his finish over the goalkeeper and wide after Kelechi Iheanacho’s lovely through ball had put him through one-on-one.

Barnes then had a goal ruled out by VAR for a marginal offside at the death.