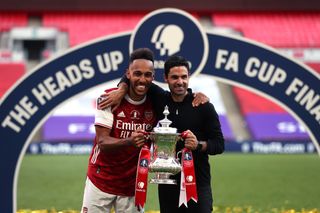 The Gunners captain scored twice as Arsenal came from behind to seal a 2-1 victory and an unmatched 14th FA Cup success.

Christian Pulisic had given the Blues an early lead at an empty Wembley but Arsenal rallied, Aubameyang tucking home a penalty to level before scoring a sumptuous second-half goal to win it for Arteta’s side.

Aubameyang, who has less than a year to run on his contract and whose future has been in the headlines for months, then dropped the FA Cup trophy in front of his team-mates before eventually raising it above his head.

“He needs more experience with trophies, we can get him more used to that,” Arteta joked when asked about Aubameyang’s trophy gaffe.

“He knows what I think about him. I want to build the squad around him. I think he wants to stay and it is just about getting the deal done.

“But I think these moments will help him to realise and believe that we are in the right path and he is a big part of that. He is loved by everybody at the club. Hopefully he can continue with us.”

For Arteta, this was a first piece of silverware just eight months into his managerial career.

He was only appointed as Arsenal head coach in December and has had to deal with the coronavirus outbreak, including contracting COVID-19 himself, and constant talk about losing his biggest players.

"He needs more experience with trophies, we can get him used to that!"— The Emirates FA Cup (@EmiratesFACup) August 1, 2020

But he has now won the FA Cup as a player with Arsenal, an assistant at Manchester City and continued his love affair with the world’s oldest cup competition with Saturday’s success as Gunners boss.

“I think so,” he replied when asked if this was the greatest moment of his whole career.

“I am really proud of what we have achieved because I know the difficulties and everything we have been through.

“For me personally it has so tough the last six months with a lot of things that have happened in our lives but I had just one mission when I came here and that was to make the players and staff believe we could do it.

“We had to change that energy and that mentality and just by seeing them in the dressing room all together, and the way they enjoy their profession and their time together, it makes me more proud and as a consequence of that after we can achieve things and win titles together.”

“He scores two goals, one being a penalty which he earned. We were very clear with the players that Arsenal play long balls in behind you, they play football as well,” he said.

“We allowed him in easily, he is a top-class player and the second goal is the sort of speed and quality from a player of his level – moments like that from Aubameyang obviously finish you off.”

Lampard was visibly unhappy with the decision to dismiss Mateo Kovacic for a second yellow card midway through the second half, saying he thought it was a penalty but that “it wasn’t a sending off, I think that was pretty clear.”

Although he seems certain to end his first season back at Chelsea without a trophy – they trail Bayern Munich 3-0 ahead of next weekend’s Champions League last-16 second leg in Germany  – Lampard insisted he has been pleased with his maiden campaign at Stamford Bridge.

“I can’t criticise the players in their approach or desire to win the game,” he added.

“We didn’t play well enough and we know that in our dressing room.

“We shouldn’t become too stuck on today. We need to look at the season as a whole, what we managed to do, where we came in the league.

“It was a good season for us and today would have been the icing on the cake.”