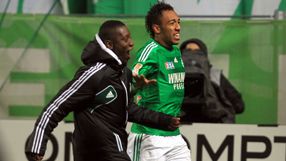 Meaux were reduced to 10 men when Edouard Ndikpo Temele Pletho was sent off for a second bookable offence in the 38th minute but the Division d'Honneur (seventh division) team held on to take their Ligue 1 rivals into a penalty shootout after the game ended in a goalless draw.

Younes Mokrane skied his attempt over the bar and Pierre-Emerick Aubameyang (pictured) converted his spot-kick to make it 5-3 and send Saint-Etienne through to the last 16.

"We can be proud but we can also be extremely disappointed," Meaux captain Raphael Lacaille, a bus driver, told Eurosport.

Ligue 1 leaders Paris Saint-Germain, who were without the suspended Zlatan Ibrahimovic, eased past Toulouse 3-1 at the Parc des Princes.

Kevin Gameiro's opener was cancelled out by Franck Tabanou in the first half, only for Argentine internationals Javier Pastore and Ezequiel Lavezzi to wrap it up after the break.

Girondins Bordeaux conceded an early goal but managed to squeeze through 2-1 at fourth division side Moulins with second-half goals by Benoit Tremoulinas and David Bellion.

Nancy went through by beating Nice on penalties away and Sochaux advanced when they edged past Montpellier 3-2 after extra time.

On Thursday, Lille travel to amateurs Plabennec, who play in the fourth division.