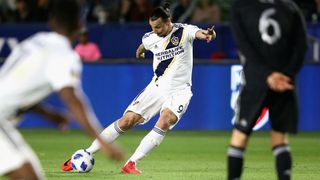 There was no repeat of Zlatan Ibrahimovic's heroics off the bench as LA Galaxy lost at home to Sporting Kansas City, while Orlando City completed a stunning comeback against Portland Timbers.

Ibrahimovic made a Hollywood-style debut in MLS last week, scoring twice as a substitute to help the Galaxy recover from a 3-0 deficit to upstage city rivals Los Angeles FC 4-3.

The former Manchester United came off the bench again on Sunday but he was powerless to prevent the Galaxy – who hit the woodwork on three occasions – from falling to a 2-0 loss against Sporting KC.

After a scoreless opening half at Stubhub Center in California, Western Conference leaders Sporting KC hit the front through Daniel Salloi in the 56th minute.

With Ibrahimovic watching from the bench and David Beckham a notable onlooker in the stands, Salloi reacted quickest as the ball hit the ground following a corner – the Hungarian finishing powerfully past David Beckham.

It was 2-0 four minutes later when Johnny Russell weaved his way around two defenders, including Ashley Cole, before poking the ball home.

The Galaxy turned to Ibrahimovic for inspiration but the 36-year-old was unable to rescue the hosts – Sporting KC goalkeeper Tim Melia an immovable force with 10 saves.

Hosts Orlando, meanwhile, came from 2-0 down to top the winless Timbers 3-2 in a dramatic finale.

Orlando were staring at defeat as they trailed by two goals with 80 minutes played, however, Christopher Mueller, Sacha Kljestan and Dominic Dwyer struck within seven minutes to claim an unlikely victory.

Mueller pulled a goal back with 10 minutes remaining before Kljestan's 82nd-minute penalty restored parity, and Dwyer completed the fightback three minutes from the end.