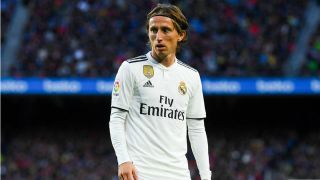 Luka Modric has credited Zinedine Zidane with giving him the confidence to fulfil his potential and claim a maiden Ballon d'Or.

Modric was crowned the world's best player on Monday, ending the 10-year stranglehold of Cristiano Ronaldo and Lionel Messi on the prize.

The Croatia midfielder won three consecutive Champions League titles under Zidane before the 1998 Ballon d'Or winner left in the wake of their most recent triumph in Kiev in May.

But Modric says a meeting with Zidane shortly after his arrival in the job in 2016 was key to his surge to the top of world football.

"Here is something I will never forget: When Zinedine Zidane became Real Madrid coach, he called me into his office after training," Modric told France Football. "He told me how he was seeing me as a player and what he was expecting from me.

"He said I was a very important player for him. And he said that he saw me as a Ballon d'Or winner one day.

"When someone like Zidane, with his personality and his career, says that to you, it gives you a lot of confidence.

"I admired him and I respected him a lot when he was a player.

"He saw me as someone like him, calm and a bit shy. He wanted me to open myself more. He made me a very important piece of the team when the team was playing very well.

"These words from Zidane helped me to go further on the pitch."