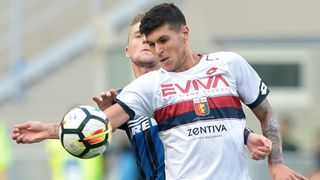 Monaco have completed the signing of 16-year-old Pietro Pellegri from Genoa for a reported fee of €25million.

The forward, who was linked with Serie A champions Juventus, has agreed a long-term deal at Stade Louis II.

"Monaco are happy to announce the signing of Pietro Pellegri," the Ligue 1 champions confirmed in a statement.

"The phenomenon, aged 16, was tracked by the biggest European clubs but has chosen Monaco for their sporting project."

Pellegri told Monaco's website: "I am very happy to join Monaco. I was very quickly convinced by the project, which allows youngsters like me to progress and flourish in the future.

"I will work hard to become an important player for the club in the future."

Vice-president Vadim Vasilyev added: "We are very pleased to welcome Pietro to Monaco. He's a very young player who already has experience in Serie A.

"He has great qualities, big potential and we're convinced that, with time and a lot of work, he will become an important player.

"This is further proof that our work in recent seasons, the results and the players who have come through in our shirt, are attracting the greatest talents in European football."

Pellegri, described by Genoa president Enrico Preziosi as "the next Lionel Messi", became the joint-youngest player to appear in Serie A at the age of 15 years and 280 days in December 2016.

He scored his first league goal in a 3-2 defeat to Roma in May last year, Francesco Totti's final match for the capital club.