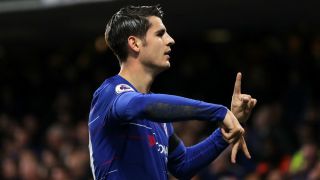 After a bright start to life at Chelsea, Morata has had a difficult time in 2018, scoring just six times in the Premier League since the turn of the year.

Five of those have come this term, but his performances have left a lot to be desired, often appearing uneasy in front of goal and lacking in confidence.

Sarri believes the Spain international is comparable to Saponara, who he coached at Empoli earlier in his career.

The former Italy Under-21 international showed enough potential to secure a move to AC Milan, but the 26-year-old's career is yet to hit the heights many expected, and Sarri feels Morata has a similar type of mental fragility.

"It's difficult," Sarri told reporters. "At Empoli I had a wonderful player, Riccardo Saponara, who we sold to AC Milan.

"Saponara was one of the best players I have ever seen, but a little bit mentally fragile.

"Alvaro has scored four or five goals in his last six matches, so I cannot see a big problem. I hope that there will be more this season.

"Every season he scores 15 or 16 goals, so he's around his average [goal return]. I speak with him every week, but on the pitch he is alone.

"I think that at the moment he's not playing to his full potential. It's difficult."