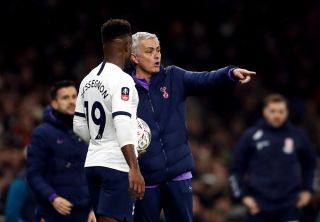 Lo Celso and Lamela gave Spurs a 2-1 win to set up a fourth-round tie at Southampton and they were the standout players.

Tottenham’s former greats Ossie Ardiles and Ricky Villa lit up the old White Hart Lane in this completion many years ago and Mourinho said they would not have been ashamed of their compatriots’ performance against Boro.

"We played so well from the first minute."— Tottenham Hotspur (@SpursOfficial) January 14, 2020

Lo Celso and Lamela both struck in a dominant first half before George Saville made it a nervy last 10 minutes for Spurs.

“But I am happy with Lamela and Gio. Lamela was out for so long, he has been coming back step-by-step.

“Playing 20 minutes here, half-an-hour against Liverpool and 90 here. You could see his fitness is coming.

“And Gio again has been step-by-step. He was so so good against Liverpool and so so good here again.

The game was notable for perhaps a farewell performance from Christian Eriksen.

The Dane has reportedly agreed a move to Inter Milan and could leave this week after rejecting a new deal at Spurs.

He has been accused of downing tools this season and was booed before kick-off.

But if he does leave Mourinho wants him to be proud of his achievements at Spurs, having been at the forefront of the team that have been among the best sides in England over the last few years.

“If his decision is to leave I think he has to leave with his head up, if he gives everything which is what he tries to do for the team.

“Fans, it’s always to respect, we have to respect but I think the boy did it for us.”

Mourinho was unable to provide an update on the club’s pursuit of Gedson Fernandes, who is expected to join on an 18-month loan deal from Benfica.

“Any news? No news. I didn’t want to know anything during the day.

“During the day it was just about the game. He (the club’s press officer) doesn’t have news for me so nothing.”

Middlesbrough were unable to recover from the two early goals, though made a game of it after George Saville’s 83rd-minute strike.

Boro boss Jonathan Woodgate, who scored the winning goal last time Tottenham won a trophy in 2008, was proud of his side.

“I hate getting beat,” he said. “But if you gift Tottenham two goals like that is it going to be difficult.

“But I tell you what, our players showed fight, desire, hunger, because you go 2-0 down you think the worst, and they didn’t give up. I am proud of them.

“I hate getting beat but when you go down fighting, no problem at all. Today was a good performance.

“It’s just the pressure of the game, the atmosphere, if you make these mistakes in the Championship you don’t get done, against Premier League teams you get nailed.”