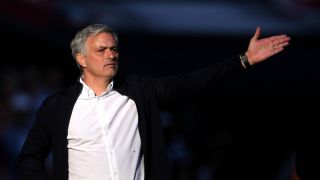 Jose Mourinho can claim all he likes that Manchester United are making progress under his leadership, but evidence on the pitch suggests the opposite is a more accurate assessment.

Mourinho's United end his second season at Old Trafford without a trophy after being held at arm's length by Chelsea in Saturday's FA Cup final, which offered a degree of vindication for Antonio Conte in what may prove the Italian's last game in charge of the Blues.

Second place in the Premier League is not an achievement without merit that should be written off, though, such was the vast chasm between United and rivals Manchester City - who finished a whopping 19 points clear at the top, smashing records aplenty and playing glorious football - Mourinho is on shaky ground when he claims his team is developing.

Shorn of star striker Romelu Lukaku at Wembley, the Belgium international only fit for the bench due to an ankle injury, Mourinho appeared a man without a plan.

That the Portuguese complained about Chelsea's "long ball" tactics when he would almost certainly have used a similar ploy had Lukaku and compatriot Marouane Fellaini been available made Mourinho look ever so slightly ridiculous, the attempt at mind games obvious.

With United chasing the game in the closing stages there were few signs of any tactical acumen. Players flew forward in desperate, unstructured attacks, but Chelsea were virtually untroubled, although Thibaut Courtois had to make a couple of sharp saves to keep his clean sheet.

1 - Chelsea are the first team to win the FA Cup after finishing runners-up in the previous season since Arsenal in 2002. Bouncebackability. May 19, 2018

There was a moment in Mourinho's post-match news conference that felt indicative of his time at United. A fault developed with his microphone, leaving the manager nonplussed as the bemused and amused press pack were blasted with white noise for a minute or two.

All the necessary and relevant equipment was laid out in front of Mourinho, but he could not get it to work. The microphone failure was probably Luke Shaw's fault.

In Lukaku's absence, Marcus Rashford was given a chance to shine, but the England forward continues to look a cheap imitation of the thrilling teenager who burst on to the scene out of nowhere during the stewardship of Mourinho's unloved predecessor Louis van Gaal.

Rashford has been in and out of the United team all season, a return of seven Premier League goals a clear indication of his lack of progress. Rashford should be a Kylian Mbappe, a Paulo Dybala, but instead it is increasingly difficult how the striker has a future at United - under Mourinho at least.

Rashford was bumped down the pecking order by Alexis Sanchez's arrival in the January transfer window and the Chilean showed nothing at Wembley to suggest the primary motivation behind his arrival was not merely to thumb a nose at City, who made no secret of their interest in snapping up the forward from Arsenal.

If Sanchez's signing was intended to give Rashford the nudge he needed to kick on, the polar opposite has been the actual result.

Anthony Martial replaced Sanchez for the last 20 minutes at Wembley and was similarly ineffective, held at bay comfortably by Cesar Azpilicueta as he tried and failed to make a telling run down the outside on the left wing time and time again.

"Why always Lukaku?" Mourinho said in a barb aimed at critics of his team selections after a 1-0 league loss at Brighton that saw Martial and Rashford toil with Lukaku and Sanchez sidelines. "You have the answer."

But the problem is not United's players. A year or 18 months ago, few would have suggested Leroy Sane and Raheem Sterling were better prospects than Martial and Rashford. But Pep Guardiola has cajoled and guided the duo into becoming two of Europe's elite players.

It is frightening how good the pair could be in a couple of years and is tempting to wonder how Martial and Rashford would perform under gregarious Guardiola rather than miserable Mourinho.

Mourinho's motivation techniques for the young talent in his squad will face further examination after a trophyless sophomore year at United.

That Martial and Rashford have clearly gone backwards this season, while Shaw's main purpose continues to be to act as the manager's primary whipping boy, will not have gone unnoticed at a club where developing young players has always been a cornerstone.

Nemanja Matic - slow and cumbersome against his old club at Wembley, in contrast to the boundless energy from the irrepressible N'Golo Kante - has already called for United to back Mourinho in the transfer market ahead of the 2018-19 campaign.

But United already have a strong squad.

Mourinho has Lukaku, Sanchez, Martial and Rashford - a strikeforce the envy of world football. He has Paul Pogba, anonymous bar a late headed miss in the final, the world's most expensive player before Neymar smashed that record. He has Juan Mata, a delightful playmaker who got three token minutes as a substitute at Wembley. He has the world's best goalkeeper, David de Gea. Mourinho cannot complain about lacking resources.

Sixth to second is a jump, but three trophies to zero is a dreadful drop - Mourinho having defiantly counted the Community Shield throughout last term despite its accepted status as a glorified pre-season friendly.

United also managed to lose to all three of the newly promoted clubs, which would have been unthinkable under the great Alex Ferguson.

Mourinho's men no longer boast a killer instinct to sweep the supposed minnows of the league aside with ease.

United will be desperate to avoid becoming another Chelsea, where managers are sacked almost as regularly as the changing of the seasons, although if Conte does depart he will at least have gone out on a high. But Mourinho's method will not deviate and, with United fans rapidly losing patience with his stodgy style of play, a breaking point is surely on the horizon.