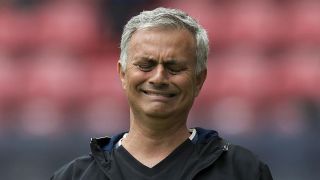 Jose Mourinho paid tribute to the Manchester United fans after the manager began his reign with a comfortable 2-0 friendly success at Wigan Athletic.

In his first match in charge of the club, second-half goals from Will Keane and Andreas Pereira proved the difference at the DW Stadium on Saturday.

Mourinho selected new signings Eric Bailly and Henrikh Mkhitaryan in his starting XI for the clash, although the likes of Zlatan Ibrahimovic and Wayne Rooney were not involved after their Euro 2016 exploits.

A healthy United following made the short trip to Wigan and sang Mourinho's name during the match, leading the Portuguese to laud his new club's supporters.

"I'm very happy, the result is obviously not the most important thing but it is always important," he told MUTV.

"I'm happy with things we tried in training, some principles of our play offensively and defensively, and I could see them there.

"It takes time, but I could see different things. We started thinking about football the way I think and that pleased me.

"Everybody played and had a positive performance so I'm happy, and best of all I never saw something like this, that so many supporters give their permanent support to the team and this is fantastic.

"So if this is like this in a friendly match, what I said in my presentation, if they wait for something from me I will try to give them everything and I'm sure they will give amazing support to the team."