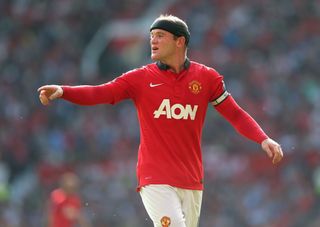 Rooney, who has scored five goals in seven games in all competitions this season, missed United's 1-1 UEFA Champions League draw at Shakhtar Donetsk on Wednesday with a shin injury sustained in training.

And while Moyes revealed the problem was not serious in Ukraine, he has refused to confirm if the England international striker will be available for the match at the Stadium of Light.

"I've not seen Wayne this morning so I couldn’t give you an update yet," the Scot said on Friday.

Moyes has endured a tough start to life in the Old Trafford hotseat, with United getting their defence of the Premier League title off to a stuttering start by picking up just seven points from their opening six games.

However, the former Everton boss has no doubt that he can turn thing around after taking up the challenge of succeeding Alex Ferguson.

"Anybody who comes into a new job, you learn as you get on and as you go along. I’m doing that as well," Moyes added.

"I'm sure United know they picked the right man for the job and Sir Alex was part of that process as well."

Managerless Sunderland, meanwhile, have problems of their own and are rooted to the bottom of the table with just one point.

Kevin Ball took charge on a temporary basis following the departure of Paolo Di Canio and saw his side lose 3-1 at home to Liverpool in his first Premier League game after beating Peterborough in the League Cup.

However, Moyes still anticipates a tough game as Sunderland look for their first league win of the campaign.

"It's an important game we want to win. Sunderland look as if they played quite well in the last couple of games (against Peterborough and Liverpool)," he added.