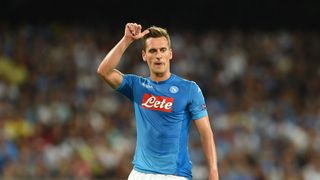 Napoli striker Arkadiusz Milik is ahead of schedule in his recovery from a serious knee injury, his surgeon has suggested.

The Poland international injured his right knee in September's 3-2 win over SPAL, having spent four months sidelined by a similar injury in his left knee last season.

Milik is not expected to return until the new year, and has suggested he could seek a January loan move in his attempts to regain fitness ahead of the 2018 World Cup.

And his chances of featuring in Russia were given another boost after his doctor delivered a positive update.

"Milik is already doing better now after a month compared to at this stage last year following surgery to the other knee," Professor Pier Paolo Mariani told Sky Sport Italia.

"He recovered well on a muscular level and is doing very well compared to the timing we are accustomed to.

"Now the more specific work begins and I predict a happy return to sporting action."