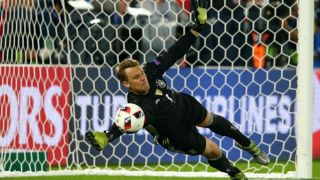 Manuel Neuer believes the better side advanced to the Euro 2016 semi-finals after helping Germany past Italy in a dramatic penalty shoot-out win on Saturday.

With the scores still locked at 1-1 after 120 minutes in Bordeaux, a shoot-out was to decide who would meet either France or Iceland for a spot in the final.

Germany goalkeeper Neuer came up big to deny Bonucci and then Matteo Darmian, with Jonas Hector slotting the winning penalty in a shoot-out that saw seven players fail to find the net.

"I have never experienced a shoot-out like this. I think most of the Italians just aimed into the middle," Neuer - who was voted man of the match - told UEFA.com.

"The 1-1 score we conceded during regular time was a bit unlucky. But I believe we were the better side and are deservedly through to the semi-finals.

"Then this shoot-out just fitted that duel between Italy and Germany. It wasn't that easy. It was a war of nerves."