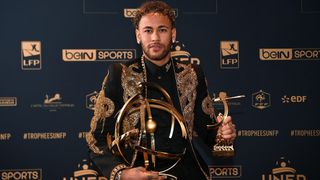 Paris Saint-Germain star Neymar described himself as tired of transfer talk amid links to Real Madrid and Manchester United.

Neymar, 26, has been linked with a surprise PSG exit after just one season, despite being contracted until 2022.

PSG president Nasser Al-Khelaifi said on Saturday he was "2000 per cent" sure Neymar would remain with the Ligue 1 champions.

The speculation is also growing tiresome to Neymar, who was named the Ligue 1 Player of the Season on Sunday.

"Everyone knows what I have come here to do, the goals I have," he said.

"My goal now is the World Cup. It is not time to talk about transfers.

is presented with the Player of the Season Award by none other than  May 13, 2018

Neymar scored 28 goals in 30 games for PSG before his season was ended prematurely by a serious foot injury in February.