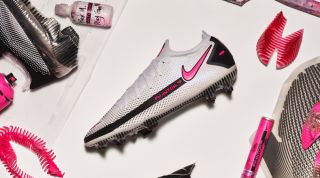 Nike have released the brand new Phantom GT boots - and they look fantastic.

But as well as considerable style, these boots have a hell of a lot of substance. These boots have been through hours upon hours in the Nike Sport Research Lab (NSRL), with the manufacturer's boffins working tirelessly on this unique design.

The new Nike Hyperquick System features a generative chassis with agility studs. It is built to be more rigid in the heel for planting, while the forefoot is designed for swift change of direction. A lot of study has been done at micro level too, on how a ball connects with a boot; pressure maps and data points and a new innovative texture was created for this boot to give it optimum grip.

“The Phantom GT is fantastic — it’s pretty much exactly what I need to help me play the way I do,” Manchester City midfielder Kevin de Bruyne said of the boot. “The touch, the feel of the boot is the best I have worn in my career and I can’t wait to launch them. Nike has pretty much made my perfect boot.”

👟 Rate the new Nike Phantom GTs out of 🔟 👇 FourFourTwo

That's not all. There is an open arch to increase the “boot to ball” control area and in another first, the Phantom GT is available in the new FlyEase option, which provides a wrap-around strap around the heel.

“I felt a difference in the new Phantom boot as soon as I put it on,” Kai Havertz testifies. “The fit and feel is incredible and not like any boot I have worn before.”

The Phantom GT is available to buy now online on Nike's store.