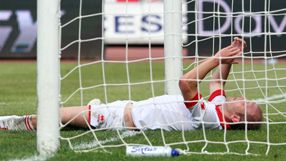 Eight of Masiello's team-mates from Bari last season were also being investigated by police over the possible manipulation of matches.

"Around one dozen people are under investigation and nine of these are ex-players of the Bari team, involved in the alleged fixing of nine matches in last season's Serie A championship," the Italian football federation (FIGC) said in a the statement.

Police said two of Masiello's friends who bet on match results had also been arrested. The three men are detained in prison in the southern city of Bari.

Laudati said investigations suggested a total of five matches had been manipulated during the 2010/11 season and 2009/10.

Italian media have focused mainly on a Serie A game between local rivals Bari and Lecce in May last year in which Bari, now in the Italian Serie B second division, lost 2-0 with Masiello scoring an own goal in the 80th minute.

Bari had already been relegated by the time the match was played.

Bari's sporting director Guido Angelozzi said the club had nothing to do with any manipulation of the result.

"We thought it was a normal match," he told SkyTG24 television. "The club is a damaged party in this. It gained no advantage from this at all."

In June last year, the Interior Ministry set up a special match-fixing task force in response to a number of high-profile cases.

Former Atalanta captain and Italy midfielder Cristiano Doni was banned for three-and-a-half years in August for his part in the 'Calcioscommesse' match-fixing and betting scandal involving Serie B matches last season.

Atalanta, promoted from Serie B, were deducted six points in the top flight this season as a result of the affair.

Former Lazio and Italy striker Giuseppe Signori was banned for five years and 15 other players were banned for between one and five years for their part in the same scandal.

Mighty Juventus were demoted to Serie B in 2006 because of match-fixing and are only now challenging for the Italian title again.