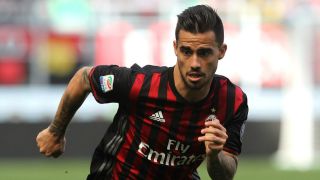 There is "no chance whatsoever" of Suso joining Inter, according to AC Milan's sporting director Massimiliano Mirabelli.

The Spanish forward was one of Milan's stars last season, although they failed to challenge for a Champions League place after spending heavily, finishing sixth in Serie A.

However, the Rossoneri are set to miss out on Europa League football after UEFA banned them in relation to a breach of Financial Fair Play and licensing regulations, though the club are appealing to the Court of Arbitration for Sport.

There has been speculation that Suso, under contract until 2022, could depart - potentially to city rivals Inter - but Mirabelli has made it clear that no such deal will happen.

Speaking at a news conference, he said: "I can assure you there's no chance whatsoever he's going to Inter.

"It's true he has a release clause valid for non-Italian clubs, but he has always said he wants to stay here with us and we are relying on him."

Speaking in May, Suso had said he was content to stick with Milan as long as they continued to show ambition.