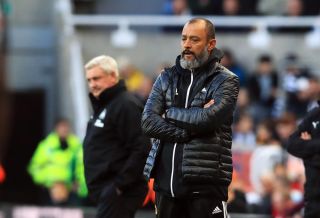 Wanderers had to come from behind to secure a 1-1 draw at Newcastle on Sunday afternoon, but dominated for long periods at St James’ Park without making the most of the possession they enjoyed in their 20th game of the season in all competitions.

Asked if he was disappointed not to have won, manager Nuno said: “It’s not about that, it’s about how we did things: first half not so good, second half, very, very good.

“We played well, were dominant, created chances, but we had to be more clinical. That’s something to improve, but I’m happy with how we did it.

“But after we played on Thursday, now to come here and compete the way we did, I’m proud of the boys.”

The Magpies took a deserved lead through skipper Jamaal Lascelles’ 37th-minute header after creating a series of chances and they made their way to the changing rooms at half-time confident they could build upon it.

However, the visitors emerged in determined mood and finally got their reward with 17 minutes remaining when Jonny capitalised on an error by Newcastle keeper Martin Dubravka.

They might have snatched victory at the death following Sean Longstaff’s 82nd-minute dismissal for a challenge on Ruben Neves.

Nuno said: “Managing the game depends a lot on who scores first and I think we punished ourselves and it’s happening too many times this season.

“We concede first and it requires a lot of effort. But the boys want to compete and they do well, so I’m not disappointed at all.

“It’s not about the result, it’s how you do things, how you want to build for the future. You cannot concede first – let’s try to be the first team to hurt and try to control the game better.”

Magpies head coach Steve Bruce was happy with his side’s first-half display, but less so with what he saw after the break and in particular the error from Dubravka, who signed a new six-year contract on Thursday, as he diverted Matt Doherty’s cross straight to Jonny.

He said: “He knows that. It’s a poor decision from Martin. If you’re going to come and flap at it, then the one thing you can’t do is just push it in the middle of the goal.

“So that’s a bit of a frustration that for all their work, really it’s a mistake which has got the goal, which is unfortunate.”

Bruce was disappointed too with Longstaff’s red card.

He said: “Well, I think it’s harsh. The behaviour of Neves as well is another thing – when they’re rolling around like that, you know they’re not hurt because if you’re hurt, you just stay motionless.

“He’s not in control of his foot, but then again how is he supposed to be when he’s just played the ball? In that respect, I think it’s harsh on the boy, I really, really do.”