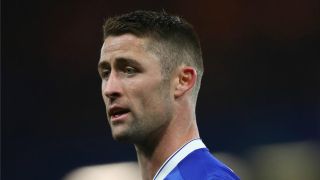 Sanchez burst onto the ball in the box after appearing to block it with his arm, with Aaron Ramsey approaching the ball from an offside position.

As Chelsea defenders hesitated, Ramsey stopped and allowed Sanchez to run on and beat Thibaut Courtois with the outside of his boot, although the goal was not initially given.

Referee Anthony Taylor consulted with his assistant before awarding Sanchez's goal, which Cahill believes was the wrong decision.

"I don't understand why the referee didn't decide to whistle," said the Chelsea captain.

"The offside rule is crazy. I spoke to a referee the other day, I forgot which game I was playing in but the ball got played through and the striker was offside.

"[Ramsey] made a run to it and then he's veered off to go into the box and because he has veered off then he is no longer offside. It is a bizarre rule but nevertheless, forget the offside, for me I thought it was very lucky to not be given as a handball.

"When your arms are up near your face it is an unnatural position to be in. So yes, it should have been handball."

Although there was debate about the validity of Sanchez's opener, Cahill accepted the Premier League champions - who had Victor Moses sent off for a second bookable offence - were well below their best at Wembley.

"You never know in football if they are going to come out and start nervy because it is a final," Cahill added. "Or they start with the bit between their teeth. They showed hunger in the first 15-20 minutes so credit to them for that.

"The disappointment for us was that we didn't play with the same intensity levels in the first half that we have been playing with all season. We looked slightly off the pace and it is unlike us. We are normally quick and strong and we normally build fast and everything was a little bit laboured.