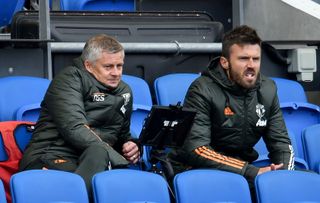 Ole Gunnar Solskjaer has no concerns about the mentality of Manchester United’s players and insists current deficiencies are down to a lack of sharpness, fitness and form.

United were reliant on a last-gasp Bruno Fernandes penalty to snatch a 3-2 win at Brighton on Saturday, which followed last weekend’s shock 3-1 home defeat to Crystal Palace in the club’s opening Premier League fixture of the new season.

Solskjaer’s side had scant pre-season preparations after being one of the last top-flight sides to finish the prolonged 2019-20 campaign due to their run to the Europa League semi-finals.

The Norwegian remains confident the team will gradually improve as they seek to rediscover the fine post-lockdown form which brought Champions League qualification.

“The spirit and the character of the boys, I don’t question at all because I see them every day, the spirit is there,” said United boss Solskjaer.

“The sharpness and the fitness might not be there, and the form, but it’s going to come.

Fernandes confidently dispatched the spot-kick in the 10th minute of added time. Referee Chris Kavanagh had initially sounded the full-time whistle before checking the pitchside monitor and penalising Neal Maupay for handball.

United looked set to start a top-flight season without winning either of their first two games for the first time since 2014 when Solly March deservedly headed Brighton level five minutes earlier.

United had turned the game around to lead thanks a superb solo strike from Marcus Rashford and a Lewis Dunk own goal following Maupay’s chipped penalty.

In an incident-packed encounter, Albion struck the woodwork five times and had a second penalty award overturned by VAR, while United had two goals ruled out for offside.

Despite the Seagulls having 18 attempts at goal, the manager praised the performance of defender Victor Lindelof following his errors in the defeat to Palace and is content with the defensive options at his disposal.

“Our shape isn’t there, we’re not sharp enough to get out to stop crosses or to follow runs, so we’re a little bit behind,” he said.

“That’s more the structural mistakes than individual mistakes, and I thought Victor did well.

“For me, we’ve got enough good centre-backs here at the moment.”

Match-winner Fernandes was culpable for each of Brighton’s goals, felling Tariq Lamptey for the penalty and not tracking March’s run.

“OK, on the goals we need to do much better, I think everyone agrees and we will work on that.”

Brighton head coach Graham Potter must quickly lift his team ahead of a rematch with United in round four of the Carabao Cup on Wednesday.

“Thankfully for my heart and for my stress levels, I haven’t been involved in too many games like that,” he said.

“Hopefully when it all settles down a little bit, the guys can reflect and think their performance level was really, really good against a good team.

“That’s how brutal this league is but that’s the challenge we have.