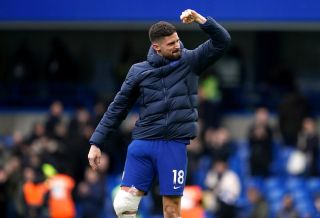 Olivier Giroud has hailed Chelsea’s derby victory over Tottenham as a “turning point” in their Champions League qualification quest.

Frank Lampard’s men opened up a four-point lead on fifth-placed Tottenham to cement their status in fourth with their first win in five league matches.

Giroud toasted his first start of 2020 with a crisp finish and a goal he admitted hoping can fire both the Blues and himself.

The 33-year-old could even have joined Spurs during his January limbo, where he would have left Stamford Bridge had Chelsea recruited a replacement. But now the former Arsenal striker is keen to keep furthering the Blues’ cause.

“It was a very important game for us,” said Giroud.

“I want to talk about the team spirit. We showed great character.

“We knew it was maybe a kind of turning point because we lost a bit of confidence at home.

“It was nice to bounce back and get this hard win against a rival.

“It’s been three months in the stands, so it was a special day for me and for all of us.”

Giovani Lo Celso escaped a red card in a major Video Assistant Referee (VAR) mistake, with the technology chiefs at Stockley Park later admitting the Tottenham midfielder should have been sent off for stamping on Cesar Azpilicueta.

Giroud drew first blood in west London, controlling expertly before smashing home as the hosts converted at the third time of asking.

The French forward forced Hugo Lloris to parry into the centre of the box with his first effort, before Ross Barkley thumped an effort against the post.

The loose ball dropped to the alert Giroud however, who steadied and lashed in at the near post.

Proud of the team performance today, great character for an important win! Thanks to our fans for the amazing support 😤💪🏼🙏🏼 #Chelsea#CFC#CHETOTpic.twitter.com/mMeCXI9HCf— Olivier Giroud (@_OlivierGiroud_) February 22, 2020

Antonio Rudiger put through his own net late on, but Chelsea were full value for the victory.

“It was on my right foot, I couldn’t get it on my left, so I tried to finish,” Giroud told Chelsea’s official club website.

“Ross followed the action and I was lucky the ball came back after hitting the post.

“It was a good feeling for me, a good moment and I am so happy to have helped the team to win.”

Chelsea switched to three at the back, just as in the 2-0 win at Spurs in December that so caught out Mourinho and the north Londoners.

Mourinho claimed an inside source had told him the Blues planned to repeat that tactical feat for the Stamford Bridge encounter, and the ex-Chelsea boss was proven correct.

Blues captain Azpilicueta was left to reflect on another pivotal tactical reshuffle, in an important home win.

“It worked perfectly,” said Azpilicueta, of the formation switch.

“We have shown over the season we can adapt to different systems. Every game is different, but above the tactics we knew what this game means for everybody at the football club.

“We knew our home form wasn’t the best, and they would want revenge after we beat them 2-0 away. We showed great character and spirit.”